Good evening, everyone. The market got hit on hump day. 🐪 💥

Every major index closed lower. The Nasdaq and Russell 2000 both tumbled more than 2%.

Energy charged up 2.5% as $XLE closed just above yesterday’s high. Basic materials and industrials both gained 0.7%, but finished ~1.5% off intraday highs.

The FAANG gang flopped. 👎 The NYSE FANG+ Index fell 3.3% and closed at its lowest price since March 8th. Here’s the daily chart: 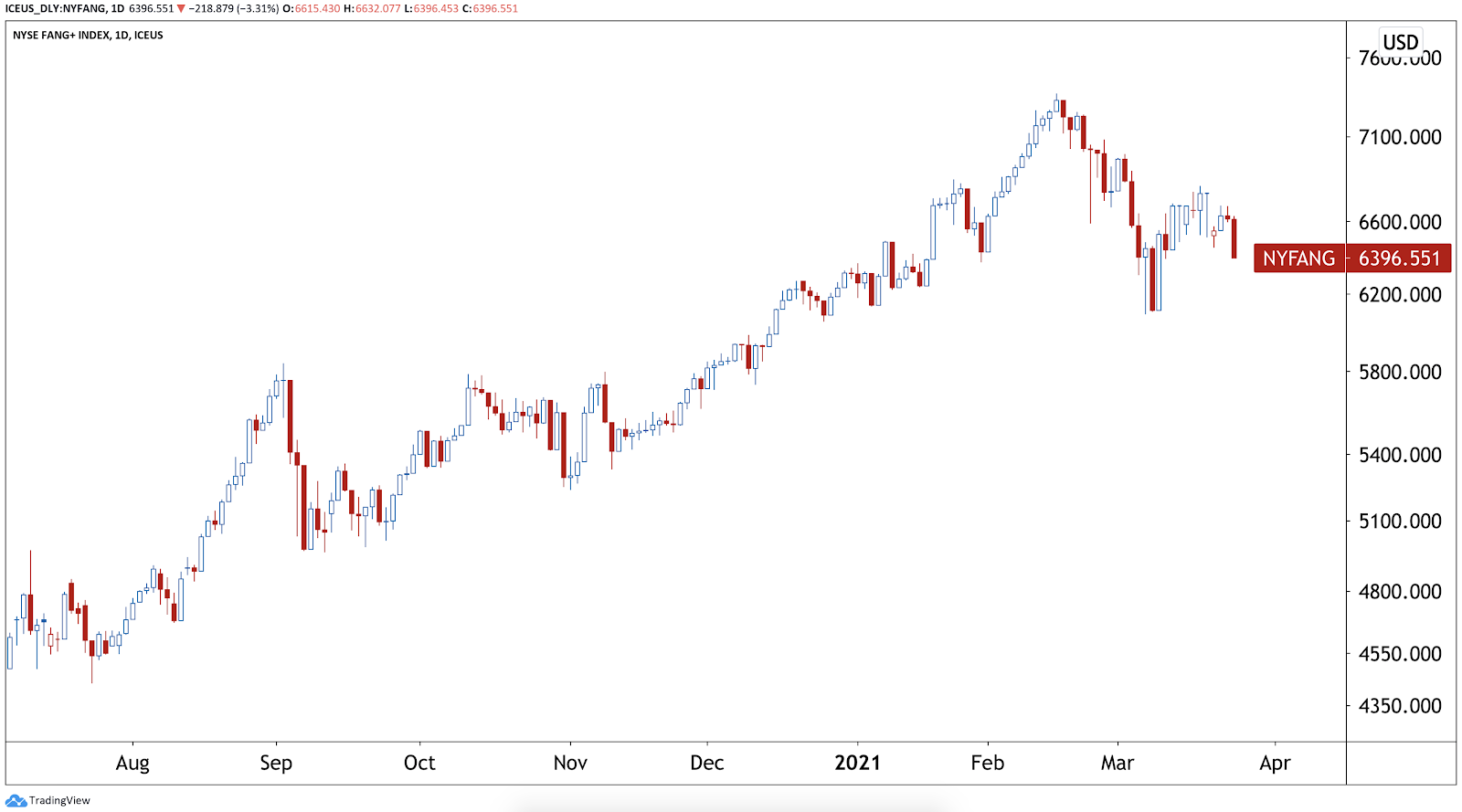 Chinese tech crumbled as its government looks to oversee a data-collection joint venture. See more below.

The MemeStocks got murdered. 🔪 GameStop dropped 34% while AMC fell 15%.

The cargo ship in the Suez Canal is still stuck. O Captain! My Captain! Somebody help that Captain!! 😂

Legislators in New York might finally agree on a bill to legalize recreational marijuana. Read more about the reefer madness below.

Here are the closing prints:

Earlier today, the Chinese government officially proposed a joint venture with all technology companies based in China to “oversee” their collected data.

The plan, led by the People’s Bank of China, marks yet another move by the country to increase regulatory power and strengthen the “The Great Firewall.” The department has yet to officially comment.

Earlier this month, Chinese President Xi Jinping said the government has a duty to reign in “platform” companies which collect data from millions of citizens.

Chinese tech got crushed on the news, squashing stocks like $TME and $IQ (check out the charts below).

Will the sector get squished like Ant Group last year? 🐜 👟 Place your bets…

Stuck in the Suez

The Suez canal accounts for ~12% of the world’s total trade. Right now, though, it accounts for 0%… because it’s blocked by a massive ship that got stuck. 🤦

The ‘Ever Given,’ a 1,312 foot vessel, is now stuck across the width of the channel. The ship is blocking hundreds of other boats, costing millions of dollars an hour, and it’s straining an already-stressed supply chain. Yeah, not good.

Officials will test a couple methods to get the ship unstuck. But so far, it’s like a tongue on a cold pole. 🥶

The weirdest part about all of this? The ship’s unique trail it sailed in the water before getting lodged… 😂

Mary Jane’s coming to Manhattan… New York is ready to legalize marijuana, thanks to Cuomo’s deal with the state’s legislators. 🚬 😎

Cuomo’s bill legalizes cannabis use (at a 13% sales tax, 9% of which goes back to the state and 4% back to localities) for New Yorkers ages 21+. Regulators could even reap taxes as high as 3 cents per mg of THC. Classic New York. 🤷 💰

It is my understanding that the three-way agreement has been reached and that bill drafting is in the process of finishing a bill that we all have said we support.

We are literally surrounded geographically by other states that are doing it. We just need to stay ahead of the times.

Pot sales could begin as soon as 1 year after passing the legislation. ⏳ Here’s Bloomberg with more info.

Yeah, you heard that right… a 3D-printed neighborhood.

The $15M community will include 15 3D-printed homes on its 5-acre land parcel. The homes have a mid-century modern style, span 1,450 square feet, and each house features 3 bedrooms and 2 baths. Take a peek:

Here’s designboom with the details.

RH, formerly known as Restoration Hardware, reported earnings after the close. The boujee furniture boutique beat on both top and bottom lines as the company looks forward to a bright future. ✨

Here are the numbers:

As we anniversary what has been one of the most difficult years in recent history, and as we begin to see the light at the end of the dark tunnel of this deadly and disruptive virus, we do so with a greater appreciation for our freedom and the simple gestures in life like a handshake or a hug. We also turn this corner knowing that we used our time wisely to reimagine and reinvent ourselves once again.

In times of turmoil humans tend to move in herds, hunkering down and finding comfort in conformity. Even those who analyze and report the news seem to find reassurance in replication, trying to fit everything into predictable pandemic piles of headlines we’ve all been reading. We, for example, have been put into the “there’s no place like home” pile. Others have been placed into the “e-commerce is everything” pile. Both are actually good piles, because if you’re in one of those you are looked upon favorably whether you’re on the top or the bottom of the pile.

I believe many on Wall Street are managing their portfolios in piles, looking through their reading glasses when they really need a microscope and a telescope. A microscope to search for the details and differences in those rare brands and businesses who belong anywhere but the pile, and a telescope to see the opportunities they will exploit post this pandemic.

Since we the people of Team RH generally move in the opposite direction of the herd, are allergic to hunkering down, and surely don’t believe we belong in the pandemic pile, we’ve taken a shot at four simple headlines that require neither a microscope nor a telescope. The four P’s that can give you an insight into what you might expect us to do next, because while most of the world spent this past year sheltering-in-place, we spent the time reimagining and reinventing ourselves at a never before seen pace.

$RH rallied 7% after hours and trades just off its all-time high. 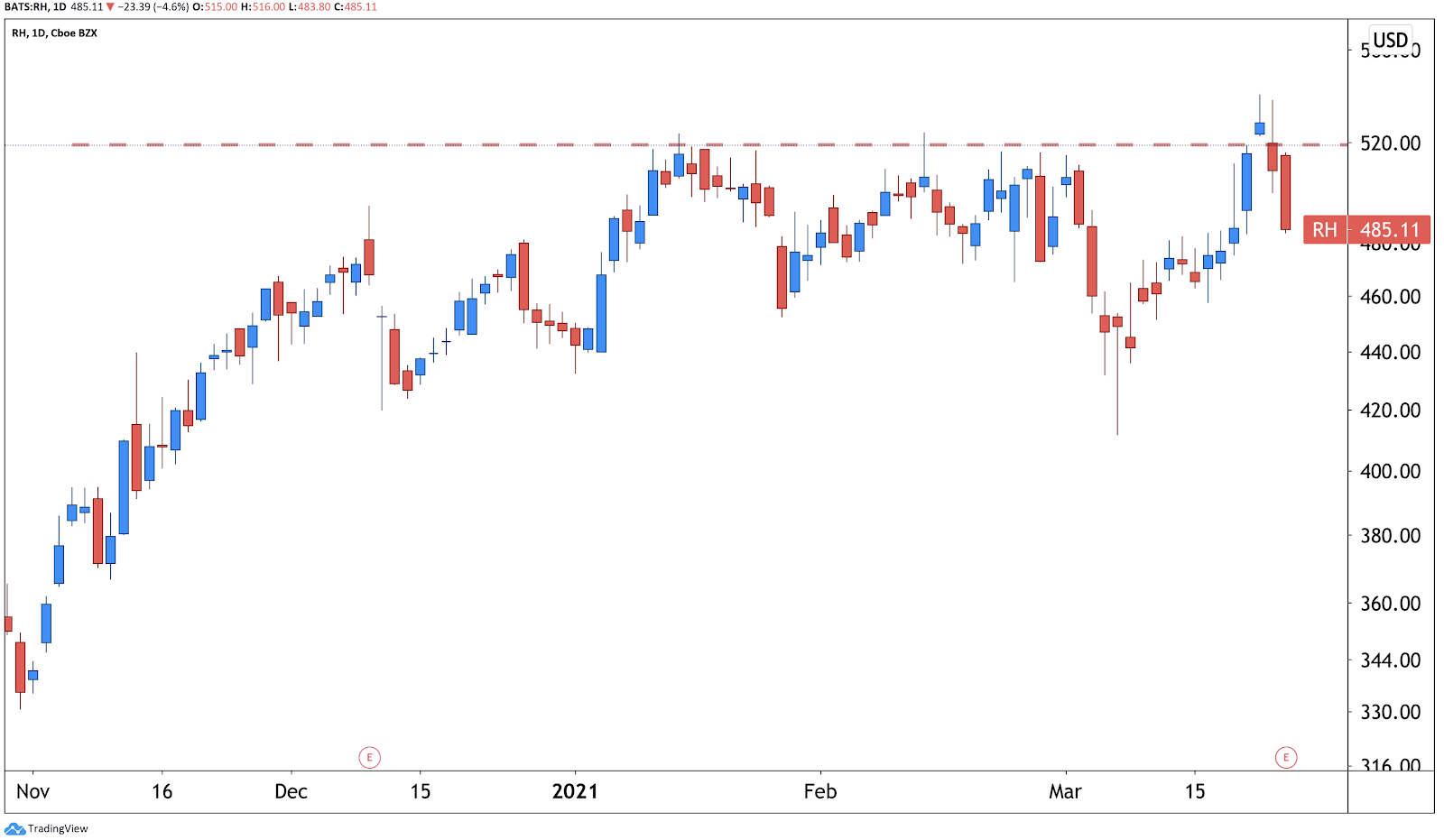 Be sure to know when your stocks report earnings. Here’s the earnings calendar.

🌌 Stocktwits After Hours: Mary Jane In Manhattan, Are The Roaring 20s Inevitable?

💸 Started From the Bottom – Of Dollars And Data

🌊 Australia’s Historic Flooding From Above

Processing...
Thank you! Your subscription has been confirmed. You'll hear from us soon.
%d bloggers like this: